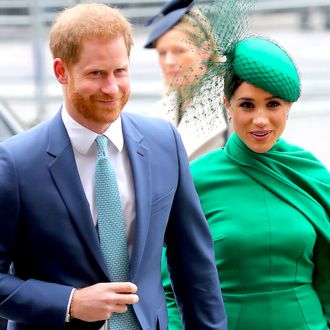 Fresh from the news that the Duchess of Sussex is expecting their second child, Prince Harry and Meghan Markle have announced that they will be sitting with the Queen for a “far-reaching” interview. And of queen we do not make Harry’s grandmother, but rather Oprah Winfrey, the undisputed queen of the TV queen. Variety reports to Oprah With Meghan and Harry: A CBS Primetime Special is set to air on March 7 at. 20 The thesis begins with a one-on-one interview between Winfrey and Markle about “going into the royal life, marriage, motherhood, her philanthropic work and how she handles life under the public eye. The women will then be joined by Prince Harry, where they will discuss the couple’s decision to move to the United States and their future efforts.

The good news that the Duke and Duchess of Sussex’s family are expanding comes months after Markle wrote an emotional op-ed in New York Times about how she had suffered an abortion. The Valentine’s Day message also came exactly 37 years after Princess Diana announced she was pregnant with Prince Harry. The Los Angeles-based couple are parents to 1.5-year-old Archie, who recently debuted in audio on the couple’s podcast, wish listeners a “happy new year.” No word on whether Archie will appear during the CBS interview, but if anyone could access the royal tot, it’s Queen Winfrey.