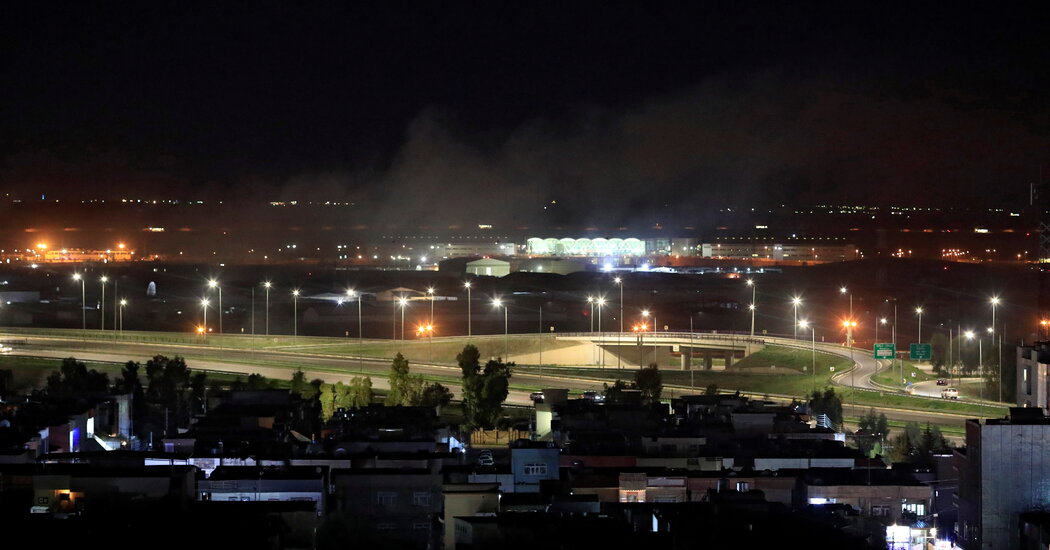 By Sangar Khaleel and Jane Arraf

ERBIL, Iraq – A rocket attack on the airport in the northern Iraqi city of Erbil on Monday killed a civilian contractor with the US-led military coalition and injured six others, including a US service member, according to a coalition spokesman.

Several other rockets landed in residential areas of the city, the capital of the Kurdistan region of Iraq, including one close to the Chinese consulate.

The attack, rarely in the normally peaceful Kurdish city, raised tensions that had already been heightened by threats from Iranian-backed militias over U.S. targets in Iraq. It was not clear who carried it out, but previous attacks have been attributed to militias funded and led by Iran.

Iran has made it clear that it intends to retaliate further against the US drone strike in Baghdad in January 2020, killed a top Iranian general, Qassim Suleimani, and a senior Iraqi security official. Days after this strike, the Iranian government launched missile attacks against US forces at the Ain al Assad air base in Iraq’s Anbar province and wounded more than 100 troops.

On Monday, minutes after the rocket attack on Erbil, the Kurdish regional government urged residents to stay indoors, and the international airport canceled departure and arrival flights.

The U.S. military has reduced the number of troops in Iraq to less than 2,500 and has withdrawn from several bases there over the past two years. It says Iraq no longer needs the help it once did to fight the Islamic State, although U.S. officials have acknowledged that militia attacks are also part of the decision to move troops to bases that are more easily defended.

The military side of Erbil airport is one of three remaining bases with a significant number of US troops. It was not clear whether anti-missile defense systems installed in the base were activated by Monday’s attack.

The coalition did not reveal the nationality of the civilian entrepreneur who was killed.

The Kurdish Ministry of Health said three civilians were injured in Monday’s attack.

Kurdish counter-terrorism forces said they had found the vehicle the rockets were fired from, but did not say where it was discovered.

In Washington, a White House spokesman said President Biden had been briefed on the attack in Erbil but had not provided further comment or details. Masrour Barzani, president of the Kurdish region of Iraq, said in a Tweet that he had spoken to Foreign Minister Antony Blinken about working together to find those responsible for the attack.

Michael Knights, an analyst at the Washington Institute for Near East Policy, said the magnitude and scale of the rocket attack on Erbil was unusually large and that it was likely intended to mutilate or kill American entrepreneurs or service members or their Kurdish allies.

“This is a test of the new Biden administration to see what they can get rid of,” said Mr. Knights in a telephone interview.

Iraqi leaders have traveled to Tehran to try to persuade Iran to suspend attacks, saying conflict between Washington and Tehran left Iraq dangerously in the middle. The embassy in Baghdad continues to operate with the ambassador and a small number of key staff.