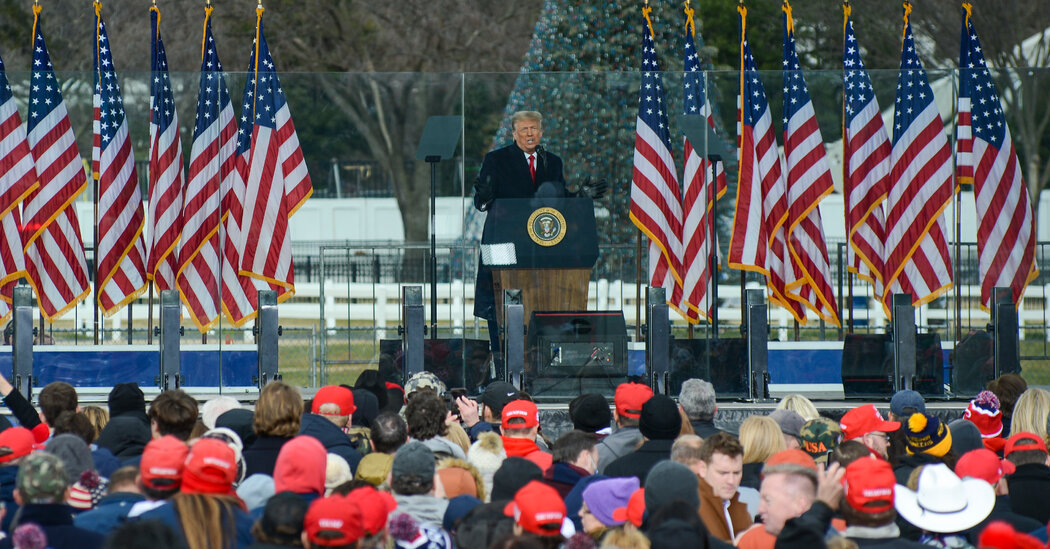 A trial against former President Donald J. Trump largely focused on his actions that led to the violent attack on the Capitol on January 6th.

But there was a decisive period that day of almost five hours – between the end of Mr. Trump’s speech at the Ellipse, in which he urged his supporters to march to the Capitol, and a final tweet asking his supporters to remember the day forever – which is still critical to his state of mind.

Evidence emerged during the trial about what Mr. Trump did in these hours, from approx. at 13 to kl. 18, including new details about two phone calls with lawmakers, prosecutors said, the president clearly warned of the chaos on Capitol Hill.

One was a phone call from the White House to Senator Mike Lee, the Republican in Utah, at 14:26 according to the call lists provided by the senator under the prosecution.

The president had made the call, but he was actually looking for Senator Tommy Tuberville, the Republican in Alabama. Mr. Lee gave the phone to Tuberville, who has told reporters that he informed Mr. Trump that Vice President Mike Pence had just been escorted as the mob got closer to the Senate.

“I said, ‘Mr. President, they just took the vice president out, I’ll have to go, ” Mr. Tuberville told about Politico.

House prosecutors used the information about this call to argue that Mr. Trump was clearly aware that the vice president was in danger and that he had a gross violation of Mr. Pence’s security. On Friday, Mr Trump’s defense team had insisted that Mr Trump was not aware of any danger to Mr Pence.

The second call was between Representative Kevin McCarthy of California, the House Republican leader, and President Trump, who was heated, according to a Republican congresswoman, Representative Jaime Herrera Beutler of Washington State.

In a statement Friday night was taken as evidence in the trial on Saturday, Ms Herrera Beutler says Mr McCarthy had a shout-out fight with Mr Trump during the call.

Sir. McCarthy had told Mr. Trump that his own office windows were broken into. “Well, Kevin, I guess these people are more upset about the election than you are,” Trump said according to a report from CNN that the congresswoman confirmed.

“Who do you think you’re talking to?” Sir. McCarthy fired back at some point, CNN reported, including an explicit.